Last night, Deadline reported that Aaron Pierre (The Underground Railroad, Krypton) has joined the cast of Blade. Although the role is still unknown, the trade reported that it had been a “highly coveted” part for almost half a year, with the studio meeting “dozens of up-and-coming actors” for the role.

The first popular theory was I saw was Doctor Voodoo. As much as I’d love to see the character in the MCU, I think Aaron Pierre as Voodoo would be extremely unlikely because being Haitian is absolutely essential to Jericho Drumm’s heritage, story, and character. Pierre is from London, and brilliant actor he may be, it would be a disservice to the role and to Haitian representation if Jericho Drumm was not played by a Haitian. Another option is Ogun Strong. In the in-universe comics history, Blade joined an international vampire hunting team in the 1960s. They try to pull a trap on Dracula, so Drac pretty much massacres them all. It’s an important part of Blade’s origin story, and the second part of his personal hatred of Dracula. Pierre could be playing this character, but from the way Deadline described the role, I think Pierre would surely have something juicier. 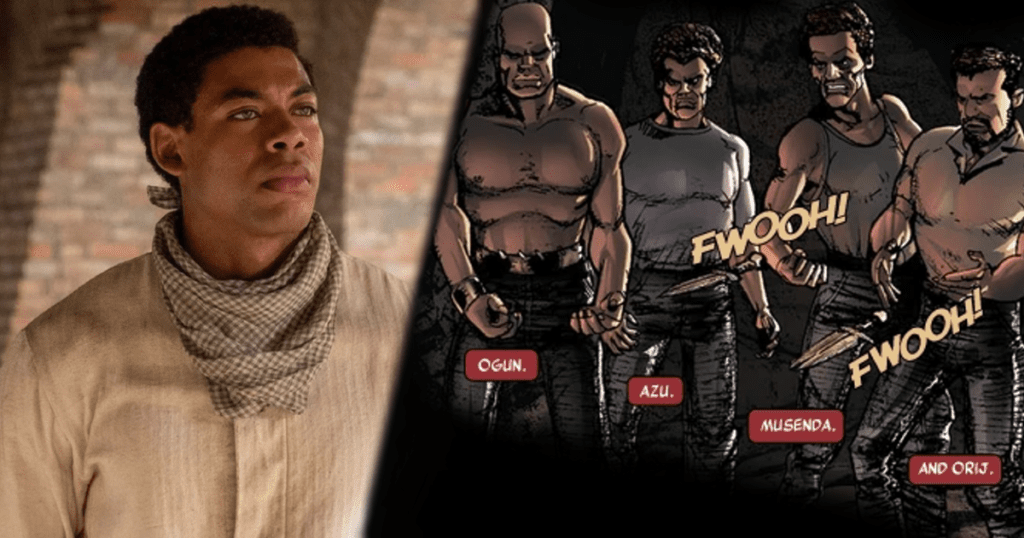 A third option is Blade’s vampire frenemy Hannibal King. Pierre would be an exciting twist after Ryan Reynolds’ portrayal in Blade: Trinity, and it could potentially promise Pierre a long future in the MCU alongside the Midnight Sons and the ongoing Darkhold storyline.

But why is Hannibal King necessary? He helped Blade take down Deacon Frost in the 1970s and was a big side character in the 1990s, but he’s so inessential that his only major appearance since then was to die in Marc Guggenheim’s 2006 Blade run. He was then immediately brought back to life just to be ignored ever since.

Hannibal King has been sitting on a shelf for 15 years because he simply doesn’t serve any storyline in a unique role. If they want to give Blade a vampire frenemy, the more interesting alternative would be fellow British vampire-superhero Jac Falsworth, who started a relationship with Blade during 2008’s Captain Britain and the MI13 after he tried to kill her. There could be an argument that Hannibal King is important if MCU Blade is hunting down Deacon Frost like he did in Tomb of Dracula at the end of the 1970s. However, I think they’ll avoid Deacon Frost and Hannibal King for the same reason we’ve never seen Uncle Ben or Harry Osborn in the MCU: I think they’re going to launch the character by actively shying away from things the Wesley Snipes movies did (just like MCU Spider-Man avoided elements from the first five Spider-Man movies).

We’ve already seen the Deacon Frost story on screen, just like we’d already seen Uncle Ben’s death. I think this version of Blade will be further along in his evolution, so Frost will be old history he’s already dealt with. This stays truer to the comics as well, because Deacon Frost is primarily Blade’s first villain, but Dracula is his Joker.

With the theories that Delroy Lindo could be Jamal Afari in flashbacks, there is the potential for Dracula to be a major villain across the past and present storylines of the movie. There’d simply be no need to do Deacon Frost again, and even less need for Hannibal King.

However, the one idea I haven’t seen anywhere else, but I think is a particularly strong theory is: Aaron Pierre could be playing young Blade.

If this is going to be a Blade semi-origin movie, then it makes sense that the first castings would be Blade (Mahershala Ali), Jamal Afari, and young Blade. Young Blade is not like most “young” superheroes. He’s not a helpless kid who appears in a brief flashback sequence just as his parents die.

Because of the importance of the Jamal Afari storyline (see below), young Blade would have to be a late teens/early 20s character with major screen time, because it is a significant, emotional story from Blade’s past. We know Pierre was cast in a major co-starring role, with Deadline reporting that his role’s casting process started in the fall alongside Delroy Lindo’s. With the theory that Lindo could be Jamal Afari, it makes sense for the other role to be young Blade because they would be the two primary characters in Blade’s flashback story, working closely together for their scenes. In the comics, Blade was born in 1920s Soho, London. Orphaned after a vampire kills his mother during childbirth, Blade meets a man named Jamal Afari in the 1930s who raises him in the ways of vampire-hunting. Eventually, in the 1940s, Dracula turns Afari into a vampire and 20-year-old Blade has to kill his own father figure. It’s an incredibly tragic coming-of-age story and the instigating point for Blade’s vendetta against Dracula.

The Jamal Afari flashback story is an essential, major part of Blade’s origin. If the movie is going to have Jamal Afari, then surely it must have a young Blade, and it must be a major role. When I saw the picture above, I was stunned, because Pierre is a dead-ringer for Gene Colan’s first Blade appearance. And not only that, but his age (27) and background (London) perfectly match the profile for a late-teens, early-20s Londoner based on early Blade.

But once we assume the film will involve young Blade, there is a question of deaging. With a superstar actor like Mahershala Ali as Blade, why bother with a 20-something actor when you could deage the original star? I think that’s a deeper case-by-case question about how filmmakers choose to use technology that I’m not fully equipped to answer, but in this scenario, I have a few thoughts.

Ali and director Bassam Tariq have been open about using their platforms to expand opportunities for their communities. Giving a young up-and-coming actor a meaty and monumental role like young Blade is the number one way to launch a rising star’s career into the stratosphere.

Given the emotional weight of the Jamal Afari story, young Blade would not be a brief flashback sequence. If anything I’d expect an Arrow-style series of flashbacks, which is exactly what Arrow co-creator Marc Guggenheim did in his 2006 Blade comic series. To do the Jamal Afari story properly, young Blade would be a giant role for a young actor, fitting the “co-star” billing that Deadline described.

The character originally designed by Marv Wolfman and Gene Colan in 1973 was radically redesigned in the 90s with the Midnight Sons and forever imprinted as Wesley Snipes after his movies later that decade. However, the original Colan look has not been forgotten. More than just one artist’s trendy design in 1973, the Colan look has become Blade’s history.

Even as recently as Al Ewing’s Mighty Avengers in 2014, Blade flashbacks have always gone back to that early look, because that’s just who Blade was during that point in his life. It’s a sensitive topic, but there’s also a question of the difference in skin color between Pierre and Ali. If Pierre was the right actor for the part, then I can’t imagine they’d turn him away because his skin color is different than Ali’s. Aaron Pierre doesn’t really look like a young Mahershala Ali, but he does look like young Blade, and I think that’s the comparison that should matter.

Pierre wouldn’t be playing a teen Mahershala Ali from the 1990s, he’d be a teen Blade from the 1940s, who then slow-ages into the character we’ll see in the 2020s. After 80 years of vampire-killing, I wouldn’t expect the two versions of the character to look or act similarly at all. With their different hair, costumes, and sunglasses, the face and skin tone of the actual actors would be the least important difference to their portrayals of Eric Brooks. Acting and writing should be enough to unite the two versions of the character in any case.

Why would a Blade movie dedicate so much time to young Blade? Because that’s the Blade story. Blade has had very few solo series in the comics, scattered over five decades. As a result, most of his comic appearances are actually as a guest star in team books. After 50 years of comics, he still doesn’t have a rogues gallery and he barely has any common allies.

So what is the must-tell Blade story? It’s his origin. It’s the story of how much vampires have taken from him, from his mother to Jamal Afari to countless friends. It’s the vengeance tale of how he trained himself to be a world-class vampire hunter, and his solemn vow to destroy Dracula, the one vampire who’s undoubtedly hurt him the most. Once you tell the Blade origin, the only major comics story left is his impossible whack-a-mole mission to kill the Dracula every time he resurrects.

As such, my final theory is that the Blade movie will heavily feature both young Blade and modern Blade, and I’m excited to potentially see both of these amazing actors bring the beloved character to life.

Although Pierre doesn’t resemble Mahershala Ali very closely, Blade is nearly 100 years old in the comics and looks and behaves nothing like his younger self. At a glance, most fans often say the two versions seem more like two different characters. But comics like Ewing’s Mighty Avengers and Guggenheim’s Blade have played the difference to their advantage, using the contrast to emphasize just how much Blade has changed and aged over his 100-year lifespan.

If the movie is using a young Blade and a modern Blade, I think there is the powerful potential to craft a comic-accurate Blade character that could reconcile their differences, unifying them into one cohesive character for a mass audience and new generation.

What do you think, could Aaron Pierre be young Blade? Which theory is the craziest? Let me know your thoughts on Twitter @vinwriteswords and let’s chat!